Analysis of Persepolis: The Story of a Childhood by Marjane Satrapi written for my junior year AP English class:

Persepolis: The Story of a Childhood by Marjane Satrapi takes place during one of the most tumultuous periods of Iran spanning the overthrow of the Shah, followed by the Islamic Revolution and the Iran-Iraq War. In this novel, Satrapi visually highlights the dynamic clashing of narratives between a young Marji and those of the Islamic revolutionaries, as they gather and consolidate power to crowd out all narratives but those of their choosing. As the story progresses, the growing maturity in Marji’s artistic style and use of shading in the visual graphic medium shows not only Marji’s physical growth, but also, more importantly, her heightened ability to create, judge, and wield narrative. As Satrapi draws her childhood against an extensively dense black background symbolic of the narrative suppression nature of the Islamic Revolution that she is necessarily etched into, we see in her visual and narrative style a counter-discourse to the visually figuratively monochromatic darkening of Iran under the Revolution coupled with emphasis on the power of storytelling and responsibility of readers to assert narrative control by passing judgement.

In her graphic novel Persepolis, Satrapi makes extensive use of solid black space in her panels with accents of white to form her visual narrative. The pervasive ambient dark background sets the tone of Satrapi’s criticism of the Islamic Revolution for the treacherous landscape it has created as the backdrop of her childhood and of the rigid, overly legalistic ideology it upholds, which only allows for narratives that fit under strictly defined categorical constraints as predetermined by revolutionary leaders. Throughout the novel, nearly every panel with a prevalent black backdrop is intended to describe a shift in the Islamic regime’s rhetoric, increasingly restrictive regulations, or the imminent fear of death due to the raging societal conflict. For example, when Marji learns of the rise of the Shah’s even crueler son, the broad panel conveying this scene is a dominating shade of black (27). Likewise, with the death of Uncle Anoosh, impending bomb attacks, and the increasing severity of the war, Marji is depicted as drifting in a void of blackness, analogous with her sense of despair from being surrounded by the destructive nature of the dark landscape symbolic of the new Islamic Revolution. 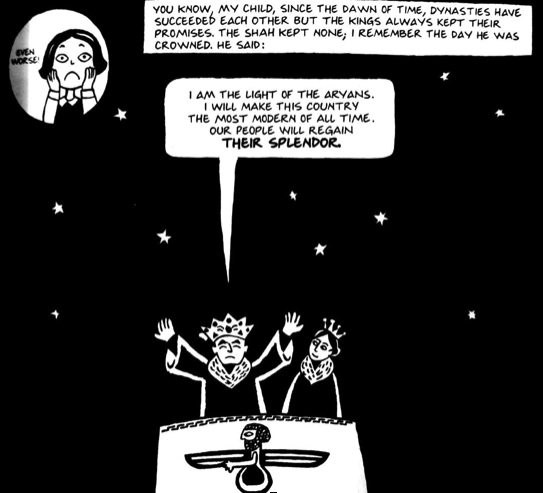 Furthermore, the visual black and white contrast in Persepolis supports the idea that the Islamic imposed narrative at the time of Marji’s childhood is necessarily split into two categories of distinct color because of the way in which leaders and followers of the Revolution see the world: rigid, fixed, with necessary truths, and without any opportunity to dispute or hold a different opinion. Satrapi’s sweeping use of black space offers a critique of the misguided radical nature of the Revolution and the permeating impact it has on not only the entire landscape of Iran, but also narrative conflict between the state and the individual.

Children, in their pure innocence, tend to instinctively believe and imitate the adult influences in their society. In the context of a misguided and immorally legalistic government, this results in detrimental ramifications for the youth in society. Marji, as a small child, is unable to fully comprehend the significance of the Revolution going on around her. Thus, she turns her experiences into role-playing games of violence and torture, even going so far as to harass another child (45).

Living in a harsh society as a young child who lacks the skills to wield and discern narratives, Marji can’t help but be influenced and drawn into the dark societal ideologies and structured narrative of black and white. This is further supported visually in the way black color from the landscape leaks into each person that Satrapi draws. Her style of drawing does not apply the use of clean and precise lines. There are noticeable gaps in the drawing of individuals throughout the novel where the black of the background permeates into the image of the individual and their narrative system. The series of panels where Marji’s mother rebukes Mehri and Marji for taking part in the demonstration show the black background behind Marji is also the same blackness that is a part of her hair and clothes (39).

The boundaries of Marji’s image disappear and her narrative merges with the backdrop of dark revolutionary ideals. This then argues for the extremely pervasive influence and narrative suppressing power that Marji is up against. Children do not posses the skills to analyze implicit meanings or complex narratives beyond what they hear or are told by adults considered to possess wisdom. Furthermore, it is even more difficult in this severe environment to retain one’s own narrative given that societal leaders will not hesitate to suppress any differing narratives or ideologies through violence.

In order to push back against the inflexible, legalistic, black and white rhetoric of the landscape, Satrapi argues for the importance of educating oneself on how to maintain control over individual narrative through telling one’s own story, listening to the stories and experiences of others, and passing judgment on these stories. This is the same vehicle that allows Marji to become more adept at controlling and creating her narrative under her increasingly severe living conditions. Near the start of the novel, when Marji’s teacher and textbook endorse the Islamic narrative by saying “the King was chosen by God,” she confidently believes it (19). 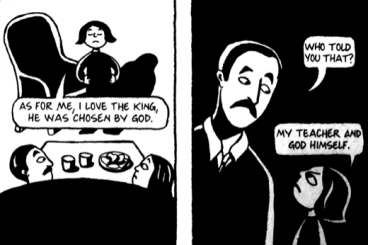 Additionally, in retelling the events of her early childhood, Marji’s inability to understand the true meaning behind stories and sayings is demonstrated visually by the childish and unrealistic graphics she uses. Her artistic immaturity is most noticeable in scenes depicting trauma, suffering, and pain. When Marji explains how she learned about the fire at the Rex Cinema and how the police restricted anyone from rescuing those inside, she depicts the people torturously burning to their deaths in the theater as ghost shaped wisps of flames floating away from the cinema chairs towards the exit (15). The unrealistic and cartoon-like imagery that Marji uses to communicate these parts of her narrative is consistent with the fact that these concepts are incredibly difficult for a young child to grasp and she is still unequipped to handle them.

However, as the novel progresses and Marji hears more stories from her parents, Uncle Anoosh, and the political prisoners Siamak and Mohsen to name a few, she grows in her skepticism of Revolutionary ideologies and improves her ability to visually discern narrative outside the stiff black and white categorical constraints imposed by the revolutionaries by exploring the technique of shading. Marji’s improvement as a consumer of stories and narratives apparent in her sharp ability to see through faulty narrative. She no longer trusts her textbooks or her teachers with their inconsistent rhetoric (44). Furthermore, she can no longer be lied to or shielded from the harsh reality of the Revolution by her parents (68). Increasingly, Marji learns to self-reflect, question societal slogans such as “to die a martyr is to inject blood into the veins of society” that attempts to justify blood being spilled and builds up the confidence up against adults in authoritative positions (144, 146).

Her growth in narrative control further supported by the accompanying improvement in her visual rhetoric and the more realistic manner of conveying her story. The skill that particularly lends itself to allowing Marji to portray her narrative more realistically is her use of grey shading that is used in the panels of young boys being blown up with keys around their neck and of the building rumble of the bombed neighboring building (102, 141).  As Marji listens to more stories and makes judgements about narratives, the world becomes slowly more shaded and less dominantly black and white, indicative of her ability to see the possibility of a grey area and other opinions and narratives distinct from the ones imposed by the government. The sharper shaded in images align with Marji’s recognition that everything is not as clear-cut and necessarily fixed in binary categories of right or wrong as the landscape around her would like her to believe.

Persepolis is a coming-of-age story that simultaneously commentates on the importance of stories in shaping, giving meaning, and providing authenticity to experiences through both textual and visual observations of Marji’s growing maturity. The period of childhood is the process of creating your own narrative, your own voice, and learning to make the right decisions distinct from parents or a society controlled narrative. Satrapi’s goal in writing Persepolis is to reclaim an Iranian narrative overly dominated with connections to “fundamentalism, fanaticism, and terrorism” in hopes that readers, having learned of the story of her childhood, can make informed judgments on the Iranian narrative (2). Therefore, when Satrapi calls the narrative contest between the state and self to the attention of readers, she is reminding readers of their role in the creation of meaning from the stories and narratives they are reading by being active, skeptical, and sympathetic consumers of narrative, which is exactly the opposite of what the Revolutionaries want. It is the responsibility of the reader to be a judge of narrative and figure out the coherence between competing and incompatible narratives. Reading Persepolis, reading stories, then becomes, in a sense, a counter-revolutionary act. Satrapi brings forward the fact that life, not just in tumultuous times like a radical nationwide revolution, but in general, is a contest of narratives and narratives matter because it gives coherences to our sense of self.