College Applications. The source of every high schooler’s worry, stress, and sleeplessness – until you’re a spring semester senior of course! I’m here to share my story through this harrowing process in hopes of perhaps providing you with some information about the process or at least about the reality of rejections and the rollercoaster of emotions experienced. This is not intended to be any form of substantial logistical advice towards approaching applications

First things first, I knew for certain I wanted to be a Computer Science major and let every college know of this fact. This helped narrow my selection of schools as I aimed to apply to top ranking CS schools along with a mix of high acceptance rate public schools that had a good CS program and that I would be happy at in the event that all my reach schools options fell through.

My personal assessment of my application was that I had average/slightly below test scores for reach schools, a rigorous curriculum with many APs and university classes, ok/decent essays, and strong extracurricular activities spanning leadership, activism, community service, and academics. 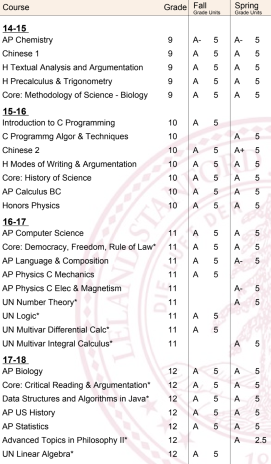 The best decision I ever made and one that I recommend all rising seniors to do is apply as many schools Early Action as possible. Me, being to very non committal person that I am, never considered doing Early Decision to any school. Instead, I applied to six public schools EA per my counselor’s recommendation. Not only did this force me to stop procrastinating and get started on writing apps early, but it also made me eligible for merit scholarship opportunities otherwise unavailable during RD applications and provided me so much comfort from December to March when I had already gotten into at least a single college. I ended up getting into five of my EA schools including Georgia Tech, ranked #8 in CS. Having that in my back pocket so to say as the rejections started to roll was an incredible stress-reducer. I also applied to Princeton Restrictive EA. I still to this day have no idea what possessed me to do this seeing as how I didn’t like the school and was adamantly against the idea of remaining in New Jersey for another four years. Nevertheless, that happened and I regret it, but it is what it is.

Around this time my schedule was packed with college interviews. I had six of them: Princeton, MIT, Cornell, UPenn, CMU, and Duke. My first interview was with Princeton and it was absolutely disastrous. It was extremely short, boring, and unengaging. CMU and UPenn went ok. MIT and Cornell went well. Duke was my last interview and I thought it went amazing. I loved my interviewer, she was so kind, helpful, and curious about learning about me. We even derailed from typical interview questions for a bit to discuss trying to resolve instances of compromising morality in friendships and it was such a great time.

My top choices going into the application process were Tier 1: MIT, Stanford and Tier 2: Carnegie Mellon, Cornell, UPenn. Realistically, I would be extremely fortunate to get into any one of these schools, but naturally, that didn’t stop me from hoping and wishing. In January, I received my deferred decision from the University of Illinois Urbana-Champaign which really was a reach school for CS majors regardless of its 60%+ general acceptance rate, but it drastically knocked my expectations down a peg. I thought to myself, if I couldn’t even get into a public school like UIUC, what chance did I have at the Ivies and other top privates? Leading up to March decision dates, I knew I had to keep my expectations in check to avoid any real heartbreak and shattered dreams, so I kept telling myself I would not get into anywhere, would emphasize how the application process is such a lottery, and would banter with friends about getting rejected everywhere. As increasingly many strangers or family friends asked me where I wanted to go to college, I learned to modify my answer from being “MIT and Stanford” to “whichever school accepts me” as kind of a cop-out answer but also a truthful one as there was no point in idolizing a school that would not end up accepting me.

MIT ruined my pi-day. It was my #1 choice school and they slammed me with my first rejection. It hurt. I ended up moping around the rest of the evening with my other friend who also got rejected. Still feeling pretty down the next day, I opened up my inbox to find an email from Cornell. Instinctually, I clicked on it and was shocked and confused. I spent the next twenty minutes googling “likely letters” before finally arriving at the realization that I had gotten accepted into Cornell. Long gone were the memories of MIT as I rode my Cornell high all the way through my Rice waitlist, USC rejection, and Ivy Day twelve days later when I was officially offered admission to Cornell. The single acceptance made me completely unfazed by my other ivy decisions. I got into Duke a day later much to my surprising seeing as how I decided to start my Duke application two days before it was due, but the excitement didn’t last long because I had so much built up anxiety and stress leading up to Stanford decision day. It especially doesn’t help when you’re quite literally surrounded by the Stanford buzz that comes from attending Stanford Online High School. I got waitlisted. With a yield rate of 80%, the dreams of the school that I had held on to for 4 years shattered. That night I wallowed in my sorrows in the darkness of my room while scrolling through the Cornell meme page on my computer to console myself. To be perfectly honest, I had kind of forgotten about Carnegie Mellon. It had always flown under my radar, it didn’t have the flashiness of an Ivy/Stanford/MIT even though I knew they were a tied for #1 CS school. It’s crazy how it worked out that my last college decision was my Carnegie Mellon acceptance the next day, which pulled me out of my Stanford slump just as with Cornell and MIT respectively. Looking back, I’m so incredibly blessed with the acceptances that I got and the fact that I even had tough choices between so many top schools. I have no real regrets about how my applications went and I now like to think of the schools that I got rejected/waitlisted by as simply not good fits for me even if I had thought at the time that they would be.

I’ll discuss in a following post about how I ended up deciding between my acceptances, but here is my full set of college decisions: